Jill Alexander Essbaum loses each mother-may-I game this week at No Tell Motel.

and a note from Jill Alexander Essbaum:


Seven years ago this week, No Tell Motel published my poem “On Reading Poorly Transcribed Erotica.” It was my first online publication.

Smash a mirror and your prize is a seven-year span of woe. Seven years of marriage and things get itchy. A single human year equals seven for a dog. Heinrich Harrer spent seven years in Tibet. The book of Genesis describes seven years of plenty followed by seven years of lack. And every seven years, they say, enough of your cells have been sloughed, shed, scrubbed away that you have become an entirely other person than, seven years prior, you were.

For seven years Reb Livingston (No Tell Motel’s public persona) and Molly Arden (the wild woman behind the scenes) have edited one of the most popular, most respected, and most generous poetry magazines of our time: Five poems, one poet. Every week for the last seven years. Every week. None were missed or overlooked. Neither snow, nor rain, nor heat, nor gloom of night, nor zombies, nor Mayan apocalypses, nor alien abduction. Seven years. Over 2000 poems. Almost 300 authors.

As a tree is judged by its fruit, a journal is made by its poems. And No Tell Motel’s have always been consistently good. Reeeeeeaaaaal good. To wit: Craig Morgan Teicher’s “Ultimately Justice Directs Them” appeared in the 2009 edition of The Best American Poetry. Other No Tell Motel poets have made Dzanc’s Best of the Web and Sundress’ Best of the Net lists—Miriam Bird Greenberg, Clay Matthews, Derek Pollard, Charles Jensen, Jennifer L. Knox, Bruce Covey, Joanna Ruocco. Any of these names ring a bell? They should! They’re fantastic! And while none of my own No Tell poems have earned the above distinctions, I will admit to a singular, swaggering pride: my aforementioned “On Reading Poorly Transcribed Erotica” is No Tell Motel’s most searched for poem.

The first poem No Tell Motel published was Jennifer Michael Hecht’s “Blind Love”. The poem’s opening couplet: Lady says Doc, I think I need glasses. / Teller says, You sure do, this is a bank. No Tell Motel’s final poem is my own, and its ultimate lines read Look, look, look to the lake. / Then leave it. I will suggest a circular—an ouroboric, if you will—correspondence between seeing and looking, between a financial bank and a lake's bank, and between women with male middle names, but I’ll do no more than propose it. Let’s leave the academics to someone else.


From No Tell Motel, No Tell Books was born. To date the press has published 15 books. How many readings have there been? How many AWPs? How many No Tell toothbrushes? How many broken pencils? Broken hearts? Broken ribs? Reb Livingston is the hardest goddamn working woman in poetry. She’s our James Brown.

Seven years. No Tell Motel is older than Reb’s son Gideon and most of my piercings. No Tell Motel was publishing poems before Cyprus and Malta adopted the Euro as their currency. No Tell Motel was launched the same summer that Harold and Kumar went to White Castle. No Tell Motel published its first poem between seasons 3 and 4 of American Idol. It’s a post-Fantasia pre-Underwood establishment.

Seven years of poems. A clear beginning, a fixed end. A discrete period of time. How appropriate. A No Tell poet is, if nothing else, discreet. Slip us a room key, Sailor. We’ll never say a word.

Carmen Giménez Smith lands in a bed of cloud this week at No Tell Motel.
Posted by RL at 12:23 AM No comments: 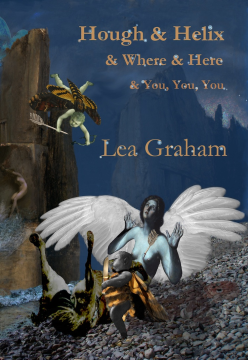 With a wonderful lyric intensity, Hough & Helix & Where & Here & You, You, You reveals our luscious world. Graham has a voice, and it sings.
—Claudia McQuistion reviews Hough & Helix at storySouth

. . . a steady thematic thumping of sex and want, a rhythmic book of push and drive.
—J.A. Tyler reviews Hough & Helix at PANK Magazine

Re- by Kristi Maxwell (Ahsahta)

and I would open by Jill Stengel (Ypolita Press)

An Antenna Called the Body by Sarah Mangold (textile series)
Posted by RL at 9:12 AM No comments:

Lorna Dee Cervantes twines hair all halo and sash this week at No Tell Motel.
Posted by RL at 12:06 AM No comments: