Dorianne Laux selected Clay Matthews' poem "Poem in Which I Sort of Break Down" for Sundress' Best of the Net 2008.

Congratulations Clay!
Posted by VSPDC at 4:21 PM No comments:

Adam Deutsch only wishes closer matched his pants this week at No Tell Motel.
Posted by VSPDC at 12:03 AM No comments:

Stacy Kidd is all you need to pollyanne the trees this week at No Tell Motel.
Posted by VSPDC at 12:17 AM No comments:

Nicholas Manning is a harem of synaesthesic sense this week at No Tell Motel.
Posted by VSPDC at 12:02 AM No comments:

What happens when you put someone who interviews poets and put them on the hot spot? Do they crack, crumble, shatter into a million heart throbbing pieces from the rattling of their knees? Or do they just ride out the heat wave as if they where born in it like South African native and prose poet Rauan Klassnik. In this interview, Mr. Klassnik chills out the debate on what a prose poem really is, explains how he makes some poets hot under the collar and talks about his two new chap books.

Kurt Geisler: One question I wanted to ask is how do you define a prose poem? One definition that I hear a lot is that a prose poem is more lyrical then narrative. What do you think? Also, what draws you to the prose form rather then using stanzas?

Rauan Klassnik:  I'm a bit sketchy on definitions in general. But "more lyrical than narrative" sounds pretty good to me. Some pieces of writing are obviously prose poems while others are obviously something else (short short, flash fiction, whatever). Some, though, could be either. As a reader, I'm not too concerned as long as it's good. So, within reason, call it what you want.

I was drawn to the prose poem because for me it was enabling. Now "enabling" is a bullshit word I should never use. A word I berate others for using. Like "seamlessly." But I've used it here, and it's true.

I'm not sure why but for some reason or another line-broken verse seemed to limit my range. All my poems were falling into a very narrow range of sound, length, feel, etc. Like a palm tree rising up and falling down like rain. And though I suppose that's kind of true of my prose poems as well, over all I feel as though I'm saying more in them.

Jean Follain wrote wonderful line-broken and prose poems. And they are quite different from each other. I'm bringing him up because I think the difference in his two finished products is kind of similar to mine. However, Follain wrote really good poems in both classes.

KG:  While looking at some of your interviews, I was curious about how you choose your questions. Being a interviewer-in-training, I find it hard to pick things that would be interesting for the readers but also fun for the interviewee to answer. Your questions are very thorough and detailed. What do you look for when thinking of questions to ask? (Because, you know, I'm totally not using this as an opportunity to improve my interviewer skills.) And who do you plan on interviewing in the future after Shane Jones?

RK:  One of my bad trait, which works well for me sometimes, is that I believe most everything I write or think will interest other people if it interests me (a play on a tired, old workshop-mentor adage that goes something like this: no surprise for the writer, no surprise for the reader).

I spend a lot of time with the manuscripts. Usually I read them through completely twice and then reread certain parts again, while all the while making notes on what sticks out for me. What’s making a strong impression on me. What the work reminds me of. Makes me think of. Etc. From that I build my questions. For better or for worse I try to make the questions multi-faceted. Give the writer some choices in angles, etc.

I have a few ideas for the next interviews (after Shane Jones) but nothing set yet. Going to AWP will probably help in that regard.

If anyone’s interested in doing an interview please don’t be shy to approach me in person at AWP (I’ll be at the  booth quite a bit I think) or to email me. I’m mainly interested in prose poetry, novels, novellas, short stories, but will also consider line-broken poetry. I’ll probably want to see a sample of the work before giving you a yes or a no.

KG: Lastly, what can you tell me about your two up coming chap books "Ringing" and "Dreaming"? Should readers be expecting more prose poetry or something a little different?

RK: It will be more prose poetry. Despite slight and occasional temptations I just can’t see myself getting back to line-broken verse.

I am, though, leaning towards playing around with the pretty strict block-form I’m using right now. But only a bit, I think, and that would feel pretty radical to me. But, we’ll see. In the meantime the poems look the same to the eye and in some ways probably feel the same too. But, I also think they’re different, evolving (another “bullshit” word, sorry) etc etc

“Ringing” is a grouping or sequence of religious, “I want to fuck you,” “your cunt is God” poems. Like an old man dreaming or willing himself back into a teenager walking back home under the universe’s giant ficus trees: it’s raw gashed cunt, glistening. (one of my new year’s resolutions was to use the words “cunt” and “fuck” less often. It’s not going so well.)

The poems in “Dreaming” are quieter, more gentler. More tender. They are, also, as the title suggests, dreams. Some of them reflected flesh-and-blood. Some stone. But all dreams. I think.

“Ringing” is from Kitchen Press and it should be out about end of February or sometime in March. “Dreaming” will be sometime in the summer (from Scantily Clad Press).

Rauan Klassnik was born in Johannesburg, South Africa and now lives mostly in Mexico. His first book, "Holy Land," released from Black Ocean in April 2008. Two chapbooks (Ringing from Kitchen Press and Dreaming from Scantily Clad Press) are due out in 2009. Rauan blogs regularly at rauanklassnik.blogspot.com

To check out some of Rauan Klassnik's interviews, check out these links: 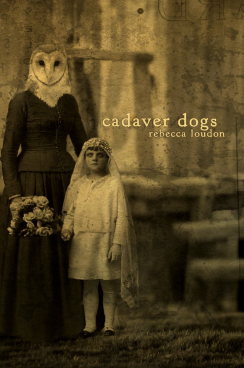 Available for purchase at Lulu and retail outlets $15

Loudon is masterful (mistressful?) at mining the loaded terrain of the subconscious mind in all of its ticking, twitching, palpitating glory. But as one might gather from the last descriptive word in that list, it's not just about the mind, it's also about the body- situated in the tricky, sticky intersections between the psyche and the flesh. She gives voice to evocative, throbbing, churning, lustful pieces of what lies beneath the teeth and the fur and the cotton; what flows through the blood with painful or sultry or poisonous or dangerous connotations.

Cadaver Dogs also received mentions: Best Poetry Books/Chapbooks of 2008 and Best Books for Winter Reading, 2008.
Posted by VSPDC at 12:07 AM No comments: